The Salve Regina Athletic Department, in conjunction with the Office of Alumni, Parent and Family Programs, announced the Seahawk Athletic Hall of Fame Class of 2022.

“This group represents the best of Salve Regina athletics over the past five decades,” said Bill Villareal, acting director of athletics.

The 2022 Seahawk Athletic Hall of Fame induction and light luncheon will take place at 2 p.m. on Sunday, September 25 in the O’Hare University Building. Seats for lunch this year are $25 per person, but free for children under five. Those interested in attending the ceremonies must register before September 19 at Eventbrite. Entry fee includes a $5 gift to the Friends of Seahawk Athletics.

Pitch ceremonies follow in the Bazarsky Conference Room at 2:30 p.m., and they’re free to anyone who wants to join.

“There is nothing more important to Salve Regina than the people who have built our strong foundation,” said recently retired athletic director Jody Mooradian. “The Hall of Fame is a time when we recognize the past, present and future. The entire Seahawk family comes together for this event, and we look forward to coming together and recognizing this year’s Hall of Fame class.

Visit the Athletics Hall of Fame website for more information. To register for the initiation lunch, go to Eventbrite. Registration is due September 19.

Class of 2022 in the Athletics Hall of Fame

With just three healthy seasons in field hockey, Burke graduated as the program’s second leading scorer. She remains the all-time leading scorer for Salve Regina women’s lacrosse and the program’s first inductee with 224 points and 166 goals. Burke has the second-most assists for a women’s lacrosse player (58) as she helped the team to its only double-digit winning total in 2011 (10-5; 0.667). Burke was at his best with goal attempts from the free position, converting a best-of-five against Emerson (4/5/2012), consecutive season highs of 18 and 19 (2011-2012) and career scores with 45 free position goals. 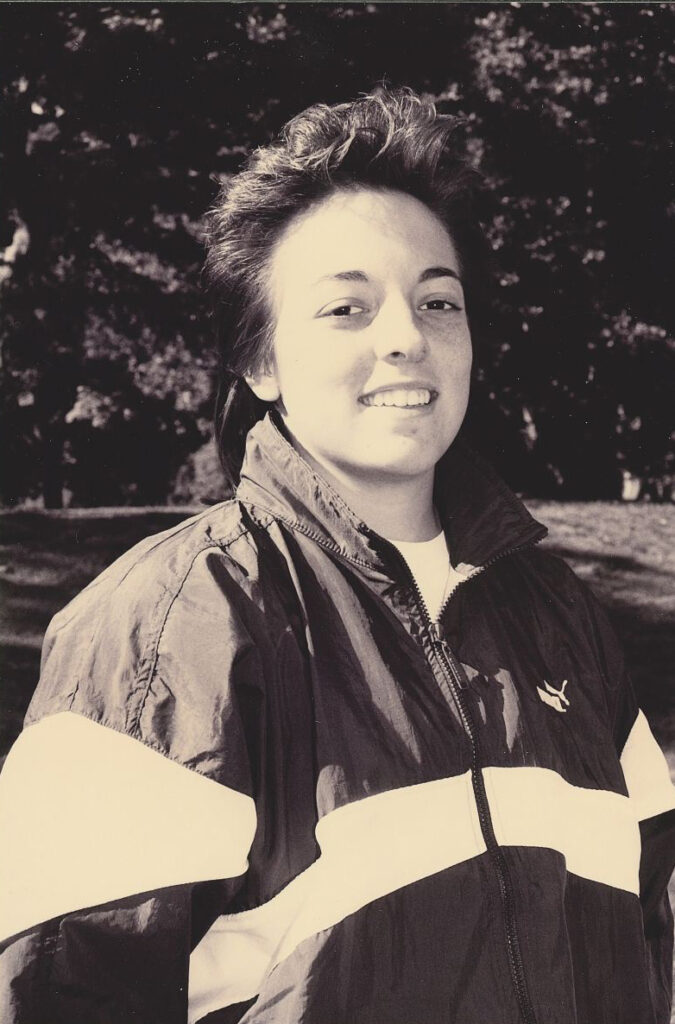 Gemma set a program record for shutouts in women’s soccer (11) after a four-year stint as a goaltender. The only Commonwealth Coast Conference (CCC) The Salve Regina Championships had a common theme with Gemma between the posts (1991, 1993), as she posted consecutive seasons with nine wins each (1992-1993). She still holds the program records in saves per game (9.41; 44 games) and save percentage (.852; 72 GA, 414 saves). On the hardwood, Gemma capped off her career with back-to-back CCC Finals appearances and added a berth in the ECAC Playoff Tournament before being named the school’s Athlete of the Year. 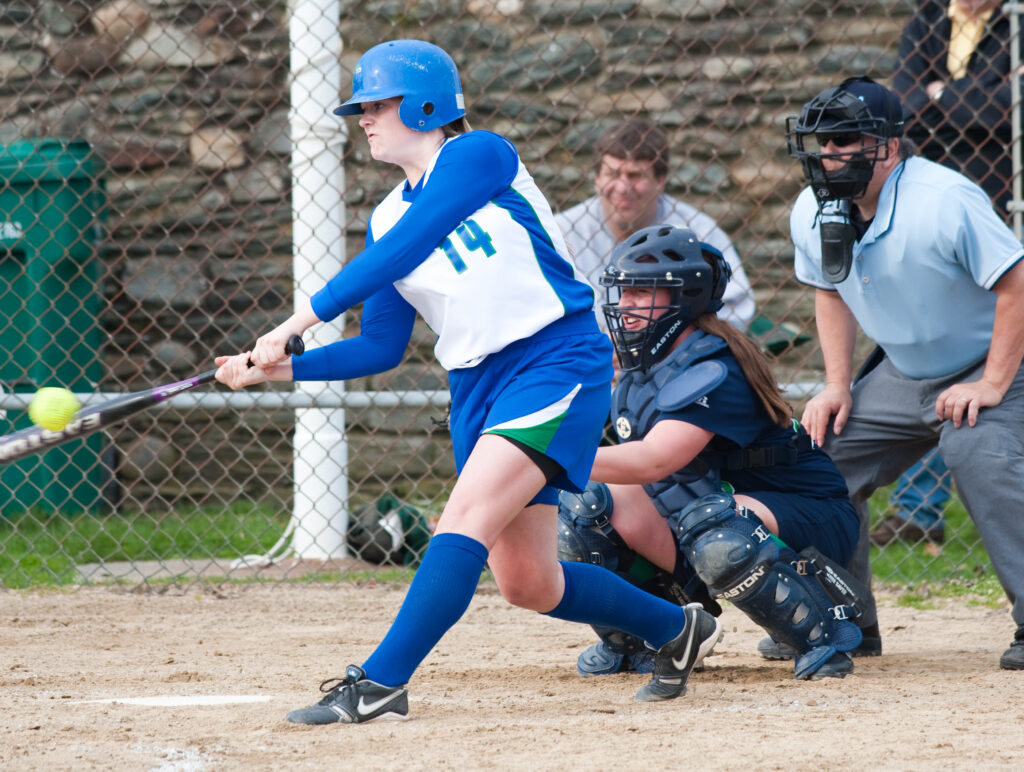 Jakiela topped the circle for the Seahawks while leading softball to an 82-74-1 (.525) record in her four seasons as a pitcher, including the program’s first trip to a post-tournament. -ECAC season. His 45 games started in 2009 still rank second all-time in the NCAA Division III record book (CCC pitcher of the year). Jakiela graduated with more innings pitched (873.0) than all but two other competitors in the division. She struck out 1,042 in her career — twice as many as the Salve Regina’s next pitcher — and holds the school records for most strikeouts per seven-inning game (8.36), the most wins (76), most appearances (149), most games started (137), most complete plays (108), most shutouts (24) and most hit batters (51). 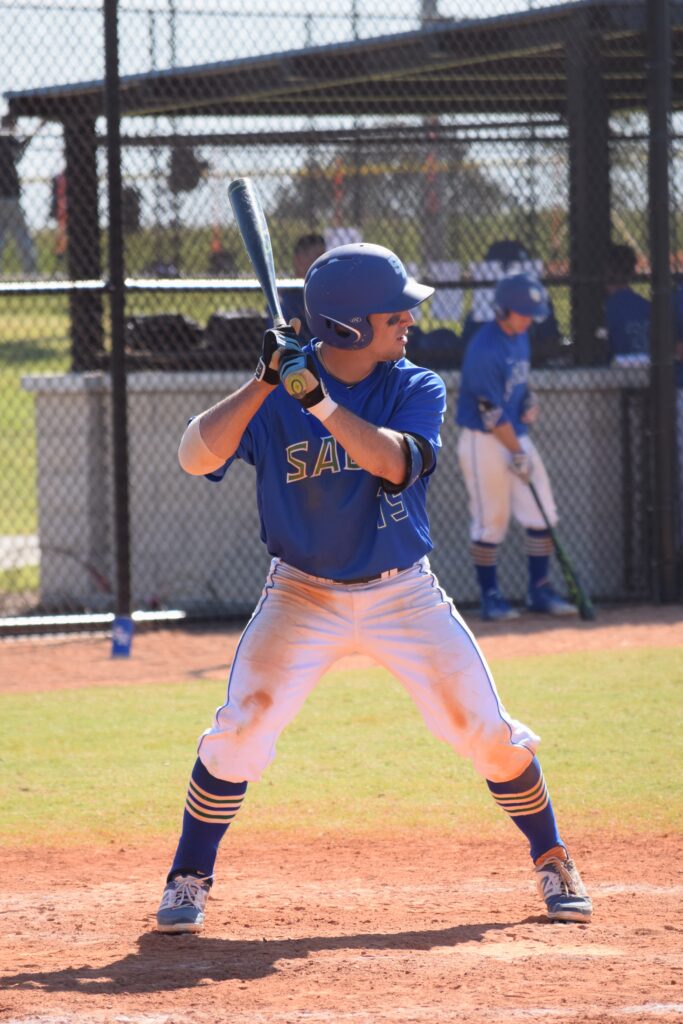 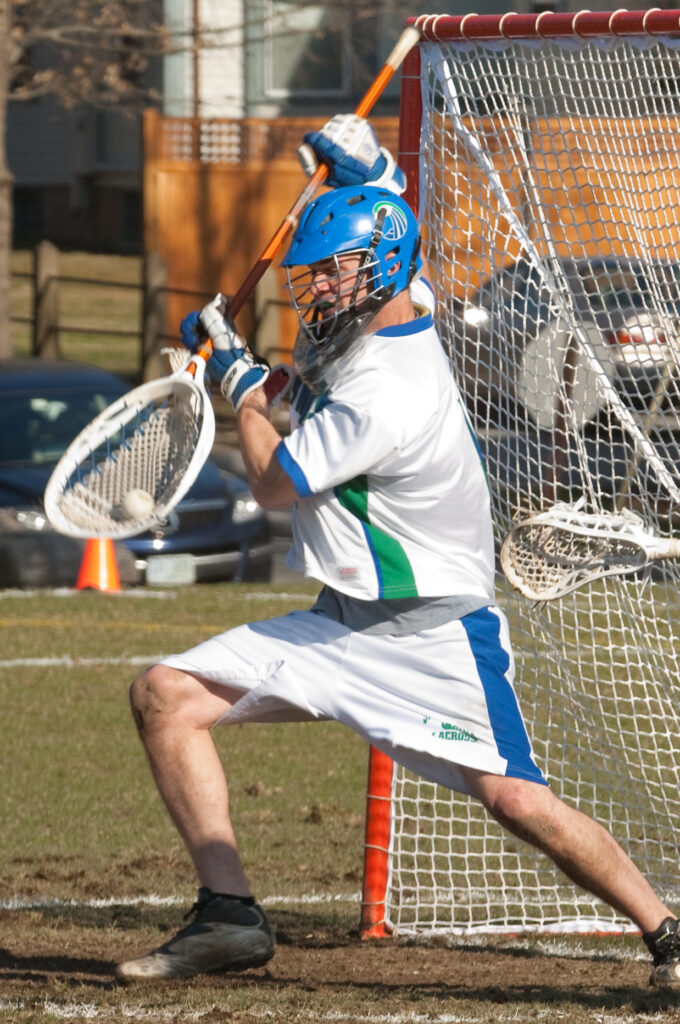 A unanimous selection at Salve Regina Top 25 Anniversary Team, Walker supported the men’s lacrosse defense as a goaltender for four seasons and had an immediate impact when the Seahawks posted double-digit wins (11) for the first time in his rookie season (2006). With a school career-high 810 saves, each of Walker’s individual seasons ranks on the program’s top 10 saves list. He is the only Salve Regina goaltender to have a goals-against-average below 9.00 with at least 1200 minutes in goal. Walker’s senior season ended with nine straight road games and the Seahawks won six times, including 7-6 at MIT. Walker graduated from the University Brother Michael Reynolds Award consecutive years (2008-2009). 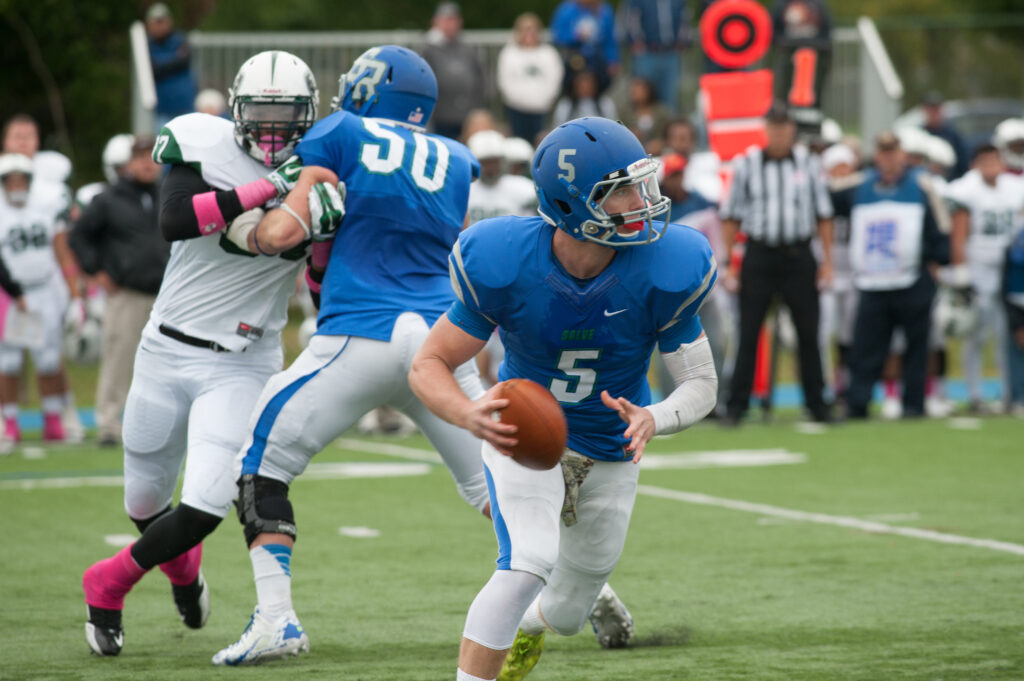 Salve Quarterback Steven Wilken, ’15, takes off as Jimmy Dee, ’15, blocks from the back as the Seahawks overpower Nichols during football action at Gaudet Field, Middletown. 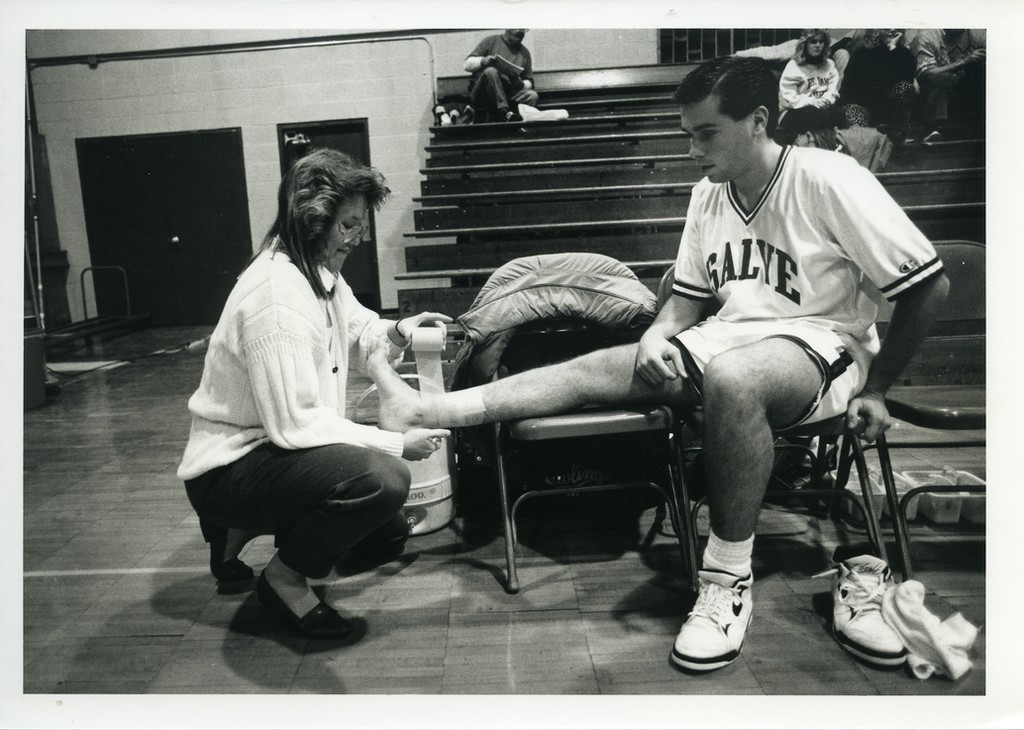 Cronin, currently director of athletics at Clark University, spent 16 years at Salve Regina where she served as head athletic coach in addition to serving as head softball coach for six seasons from 1992-1997. , Cronin went an impressive 108-56 (.659 winning percentage) and led the Seahawks/Newporters to a pair of 20 winning seasons and three straight CCC championships. She was the university’s senior administrator from 1995 to 1997 and an assistant professor, teaching sports training, first aid and CPR classes, while volunteering for the American Red Cross. 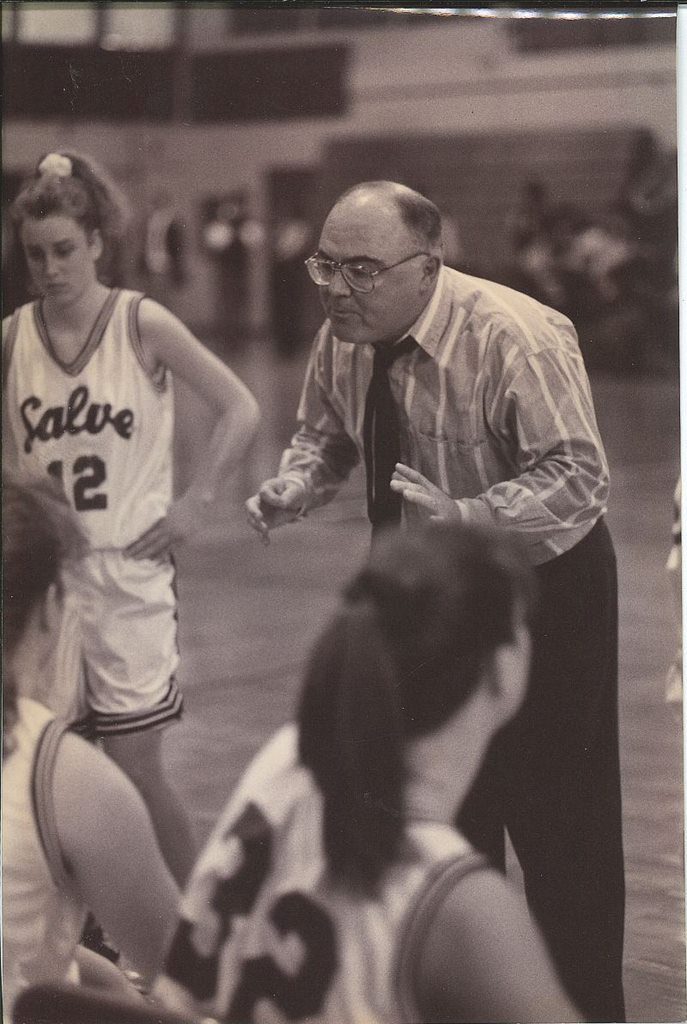 Klitzner, who died in October 2018 at home, called Salve Regina “home” while coaching four different sports over 21 seasons. He started with cross country and track and field in 1989-90 where he helped lead several Hall of Fame Seahawks to national championship competition – Tracy CarterAngemo ’94, Michelle Fobert Sarney ’95and Karen Luchun McElroy ’92. He added winter to his repertoire while assisting Mike Raffa on the men’s basketball team, before becoming head coach of women’s basketball. Two CCC hardwood runner-up seasons featured the Hall of Fame Seahawks – Kerry Cuervels Martin ’96Beth Gemma, Nicole Johnson Fitzgerald ’97 – while later guiding softball Salve Regina to a second-place finish in his only season on the diamond with Hall of Famer Seahawk Alyssa Ricci ’99.