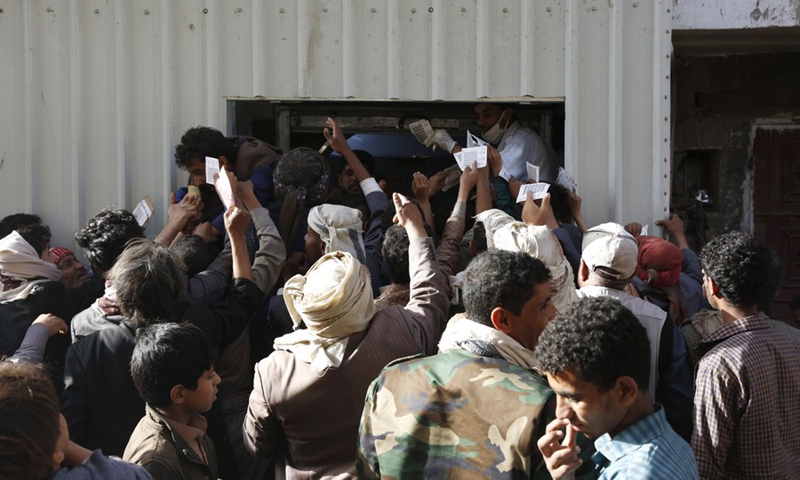 People wait for free food at a charity on the first day of Ramadan in Sanaa, Yemen, on April 2, 2022. (Photo: Xinhua)

The UN deputy relief chief on Monday called for swift and decisive international action as the humanitarian disaster in Yemen is expected to worsen.

“The humanitarian catastrophe in Yemen is about to get worse,” said Joyce Msuya, UN Under-Secretary-General for Humanitarian Affairs and Deputy Emergency Relief Coordinator.

The temporary truce represents a historic step forward, she said. “But the truce alone will not be enough to stop what we fear. Humanitarian needs across the country, including the risk of famine in some areas, could increase sharply in the weeks and months to come. The international community must act quickly and decisively to stop this.”

The need to protect the Yemeni economy from domestic challenges and the impact of the conflict in Ukraine remains urgent, she said.

The exchange rate, which is a key factor in how much food people can afford to eat, continues to crash. The Yemeni rial is now trading at around 1,120 to the US dollar in Aden. Most of the currency’s gains since the truce began have now been wiped out. That means many more families are hungry again, she said.

The conflict in Ukraine also threatens the supply chains that carry food from Yemen, nearly 90% of which must be imported. Last year, just under half of all wheat came from Russia and Ukraine. When those supplies were cut off in February, Yemeni importers moved quickly to find alternative sources. But rising world prices, shrinking access to capital and other challenges are making it much harder for importers to keep those supply chains running, Msuya said.

UN relief work is under serious threat due to lack of funding, she said.

The UN response plan for Yemen has so far received just over $1.1 billion, or 27% of what it needs. It was the largest year-on-year decline of any UN-coordinated plan worldwide, she said.

“We know budgets are tight and we deeply appreciate everyone’s contributions. But we also have a responsibility to say clearly: aid agencies are dangerously under-resourced for what we fear. Hunger is worse than ever, yet the World Food Program was forced to cut rations for millions of people several weeks ago due to a lack of funding. This was the second major food cut in just six months,” she said.

Beyond the response plan, funds for other pressing priorities are also lacking. The UN plan to address the SAFER tanker threat, for example, is still struggling to fill an immediate $20 million shortfall. The United Nations Verification and Inspection Mechanism, established in 2016 to facilitate commercial imports into Yemen, is also strapped for money. Without additional funding, it will have to close in September, she said.

Humanitarian work is becoming more difficult and more dangerous. Intimidation and incitement against aid agencies continued across Yemen. This is fueled by misinformation amplified through social media, messaging apps and in some public forums, Msuya said.

The truce offers a rare opportunity to end the crisis in Yemen for good. Efforts to meet and ultimately reduce humanitarian needs should be an integral part of seizing this opportunity, she said.

President Joe Biden will announce that the United States will provide $2.9 billion in humanitarian …